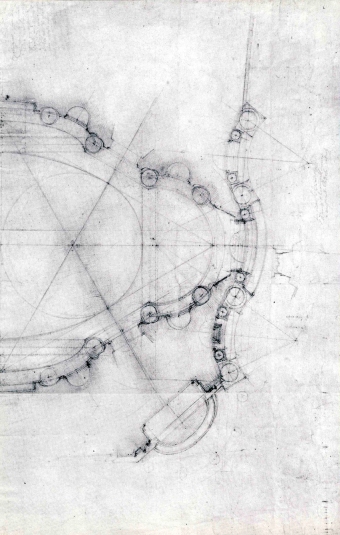 «Anyone who has ever produced an architectural drawing, in a project of their own or one by someone else, will have noticed that drawing is not an automatic action that records as accurately as possible a specific, tangible reality, built or designed by the architect. Every architectural drawing entails a thought process prior to the draughtsman’s action and the selection, from all possible features, of those to be conveyed by the drawing whilst shading in others that are to remain in that broad spectrum of construction attributes upon which not even the faintest light could be shed.

As Robin Evans said in a leading article about a drawing technique developed in England in the 18th century, “The architectural drawings concerns what might be called the architect’s field of vision. It enables certain things to be seen more clearly by hiding others: something is lost and something is gained. Its ability to depict is always partial, always more or less abstract”.

This paper analyses several plans of buildings from the past, most of which were drawn by the architects that designed them. The intention is not, however, to address the parts of the building that these draughtsmen wanted to make visible but to elucidate and make sense of everything they left out of their architectural drawings. What follows is merely an attempt to visualise that “something else” which, according to Robin Evans, was left out of all architectural drawings. To do so, we will address both the drawing itself and what it reveals about the nature of the work or its creator’s approach. As if we were contemplating a theatre stage, we will take a look behind the scenes at the real nature of the building and find out what underpins the forms we admire. We will look slightly to one side and focus our attention on the residual space that supports the forms in the close-knit relationship between space and shading.»